Despite many of my good friends being longtime hardcore poker players, I have avoided getting into the game primarily for one reason: the unappealing prospect of playing a hand correctly (statistically speaking) and yet still losing — a semi-regular occurrence known as a bad beat.

But I wasn't thinking about poker as I walked barefoot along the shore of Oahu's breathtaking Kailua beach at six in the morning. I was mostly thinking about the Portuguese man o' war, because dozens of them littered the shoreline like translucent blue landmines, their long, thin tentacles still capable of injecting painful venom even after the man o' war dies. In the dim light just before dawn, I vigilantly scanned for and weaved around landmines large and small while staking out a spot for my amateur photo shoot.

From behind slow sailing clouds the rising sun peeked over the horizon, melting away my thoughts of the man o' war as I stopped in my tracks, and throughout the next hour or so in a giddy state of awe I snapped essentially the same photo fifty or sixty times. Soon the fierce Hawaiian sun grew too intense for my pasty skin, so I packed up my camera and started my return trek back down the shoreline, once again vigilantly scanning the sand in front of me as I sought shady refuge. After arriving near the beach park toasty warm and unscathed by man o' war stings, I bid farewell to the morning sun and turned my back to the ocean, at which point an ankle-height wave gently washed over my feet, a coil of soft tentacles entangled me like a bolas, and the searing pain of being pricked by a thousand fiery needles shot through my flesh.

That was the first time I experienced the burn of the man o' war sting, but it wasn't the last, because a year later the exact same scenario repeated itself.

More so than the searing pain, and more so than the unlikely misfortune of falling victim to the same ill fate twice, the principle of it all bothered me most. If I had casually disregarded the clear warning signs strewn across the beach, gone for a reckless dip in the ocean and then gotten stung as a result, I probably would have simply shrugged my shoulders and told myself, "Welp, that's what you get, dumbass." But for several days I found it hard to shake the feeling that Mother Nature had cheated me.

Was snapping this photo worth getting stung? Hard to say. But perhaps that question misses the point, and perhaps the lesson to be learned here is that no matter how well I play the hands I'm dealt, every now and again life will hit me with a bad beat, and that all I can do is laugh it off. 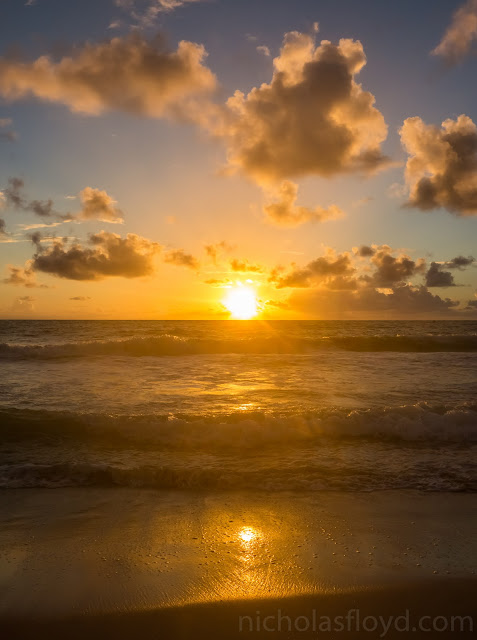 Posted by Nicholas Floyd at 3:32 PM