Again, from You Can't Spell Tokyo Without K.O.:


Both on the micro and macro level, group cohesion and social order usually trump individual needs, which probably helps explain why the Japanese — even those in desperate situations such as poverty, addiction, or debt — rarely resort to crime that would victimize someone.

This mentality also helps explain why the Japanese — even those in desperate situations such as being worked to death — rarely revolt: the group is more important than the individual, so just keep quiet and don't rock the boat.

Another major factor is the rigid Japanese social hierarchy, in which subordinates literally and figuratively bow to the will of superiors. The corporate world mirrors and perhaps even intensifies this social hierarchy, such that subordinates rarely stand up for themselves or directly voice any discontent. When faced with inhumane work hours, many Japanese employees simply grit their teeth and slog it out, rather than pulling the brakes and pointing out the insanity of the situation.

A third factor stems from Japanese cultural values, in which hard work is widely considered a virtue, regardless of whether or not the work is actually meaningful or contributes to society (for example, farming vs. investment banking). Furthermore, unpleasant or difficult work often carries extra virtue, due to the perseverance and self-sacrifice required. Probably very few Japanese actually enjoy working eighty hours per week, but many Japanese revere that type of “hard work” as honorable.


In Japanese culture, pride, shame, and saving face heavily regulate behavior and heavily contribute to Japan's epidemic of overwork — perhaps the main reason why more Japanese employees don't simply quit. To do so might reflect poorly on the employee, making him or her appear weak: everyone else can handle the workload, so why can't you? If Matsuri Takahashi had quit her job at Dentsu and applied elsewhere, most likely she would've had to explain why she quit her previous job, but very few Japanese companies would accept “literally being worked to death” as a valid reason.

Further contributing to the culture of overwork, the Japanese tend to be extremely thorough and unwavering in their standards. Whatever the goal — whether building cars or harvesting rice fields — they often strive for perfection. “Good enough” isn't good enough.

When these factors mix with unrestrained capitalism — where the never-ending goal is to make more and more money — it becomes a recipe for disaster: a population with perfectionist tendencies, terrified to lose face or appear weak, willing to disregard their own individual well-being for the sake of the group, rarely stepping out of line or questioning authority, all striving toward the impossible goal of infinite growth.

So what's the solution?

A sweeping cultural revolution would probably do the trick, though that seems unlikely.

Replacing capitalism with socialism (or some other sustainable system) would probably do the trick, though that also seems unlikely.

Perhaps the first and most important step is truly acknowledging the problem. Having been born and raised in a culture where very few people leave the office on time or take a real vacation, many Japanese simply concede such a fate without questioning it. 仕方が無い (shikata ga nai, “it can't be helped / that's just the way things are”) and other such fatalistic sentiments echo throughout Japan, but a quick look around the globe reveals that in most of the world, that's not the way things are. Work doesn't have to be so brutal.

A second step could be for Japanese employees to focus on working at foreign companies in Japan, where the workload tends to be more humane, and where people would be more likely to accept “literally being worked to death” as a valid excuse for quitting a previous job.

As for that sweeping cultural revolution, perhaps the Japanese could start by taking a lesson from the general Hawaiian work ethic, succinctly summed up by this restaurant's business hours: 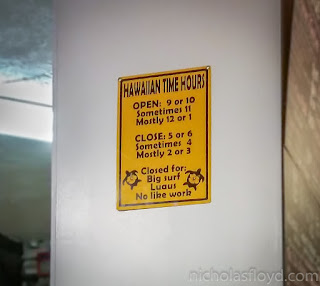