Book review: Trying Not to Try, by Edward Slingerland

The thing about ancient Chinese philosophy is, it's ancient. As relevant as the core teachings might still be, the metaphors and original context sometimes suffer from antiquity so severe that many modern-day folks (myself included) simply can't relate, and therefore miss the message. These days one typically isn't faced with dilemmas such as how to most elegantly butcher an ox for ceremonial offering, or what to do with a crop of comically oversized gourds.
And from a Western point of view, the other thing about ancient Chinese philosophy is, it's Chinese. That is to say, it's incredibly foreign. Many Westerners (myself included) sometimes struggle to understand even modern Chinese culture, simply because Western and Chinese cultures differ so greatly. The two take radically different approaches even to something as fundamental as language: non-tonal pronunciation versus tonal, a phonetic alphabet versus a complex logography, etc.
These represent two considerable hurdles for the modern Westerner interested in ancient Chinese philosophy. However, Edward Slingerland overcomes both of these hurdles seemingly with ease in his book Trying Not to Try. With an extraordinary understanding of ancient China and its great thinkers, Slingerland excels at "modernizing" their teachings — explaining the original context and meaning in ways that instantly click. He then goes one step further, backing up these ancient teachings using examples from modern science, focusing on fascinating topics such as charisma (bombing an interview versus nailing it), high-level performance (being "in the zone" versus choking), happiness (why trying to be happy usually fails), and many others.
Slingerland's fluid and engaging writing style held my attention all the way through, and even though I'm not particularly interested in philosophy or ancient China, I thoroughly enjoyed this book.
Rating: 5 out of 5 stars 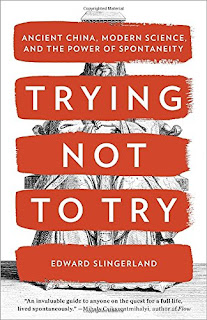