Capturing raw, fleeting moments of nature often requires a certain degree of fortuitous timing: having the camera aimed and ready precisely when that sea lion leaps from the water, flailing for its life, millimeters away from gruesome laceration by a great white's razor-sharp teeth. A flicker of time that lasts perhaps only a millisecond — gone in the blink of an eye — can be immortalized by a photographer with a lot of luck and lot of patience.

Snapping this particular photo required no such luck or patience, because throughout the entire twenty-minute train ride this gentleman's tongue only protruded farther and farther from his mouth. As if he had accidentally swallowed bathroom cleaner, he continually puckered his face and clenched his closed eyes into a bitter scowl that bore a striking resemblance to the neon-green icky face of Mr. Yuk poison stickers.

Posted by Nicholas Floyd at 2:54 PM No comments:


Like a dismembered limb twitching on its own, his right hand unconsciously clawed away at the empty basket, in search of the hamburger that was no more. His diagonal and unintuitive alignment with the table, with its pointed corner jabbing into his chest, suggests that his body had urgently shut down post-feast amidst his attempt to stand up and leave. Though he might have eaten his entire meal while seated this way, that seems unlikely because his chair partially blocked the walkway of this narrow restaurant, and the Japanese typically frown upon this sort of obtrusive public nuisance, even such a minor one.

Similar to the tight confines of economy-class airplane seating, most places in Japan afford patrons barely enough room to fit — or in the case of larger patrons, not nearly enough room to fit — with an unspoken understanding of common courtesy that one should avoid spilling over into a neighbor's seat, into the walkway, etc. In Japanese society an unambiguous line usually separates the acceptable (passing out in public) from the unacceptable (sprawling out in public).
Posted by Nicholas Floyd at 12:28 PM No comments:

[The following is an excerpt from You Can't Spell Tokyo Without K.O.: A photo-essay dissecting the Japanese epidemic of passing out in public.]


During the mid-twentieth century, scientist John B. Calhoun conducted a series of experiments to determine the effects of overpopulation on mice and rats. In the 1960s he conducted his most famous experiment, known as “mouse universe” or “mouse utopia”, which provided optimal living conditions for the mice: limitless food and water, ample opportunities for socializing and mating, plenty of nesting material, lack of predators, lack of disease, and so forth. His experiment presented the mice with only one challenge: overpopulation.
Read more »
Posted by Nicholas Floyd at 3:30 PM 2 comments: 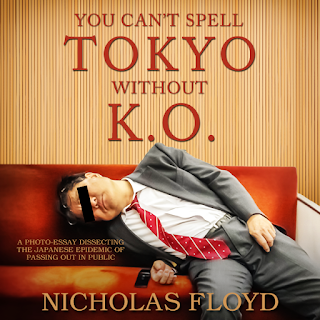